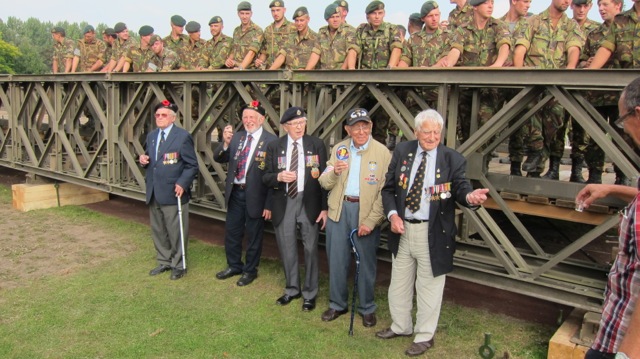 “You wondered why you really had to fight that damn war…”

Ken Thiis was 20.5 years old when he set foot on the beaches, with the 8th battalion of the Middlesex Regiment, a Machine Gun Batallion, in Normandy in June 1944.

From France he moved with his unit to Belgium and then to the Netherlands. “It seemed to us like we came home, we were well received here in the Netherlands,” he remembers. Kamp Vught was already released by other units when he arrived there in October 1944. More than seventy years later, tears still catch him when he, along with other veterans, visits the memorial monument in Camp Vught. They have a movie about the Jewish persecution in the Netherlands and the beastly treatment of the Jews in the SS camp. It was the first concentration camp that the Allies saw. “From that moment on we would not take prisoners anymore,” was Ken’s comment. The hatred towards the Germans was overwhelming. If during a guided tour by the camp, some-one makes another joke by knocking on a mattress, saying, “Those were better than us,” Ken bites him, “But we had no dogs biting us.”

That hatred disappeared when Ken came into contact with other German citizens – years later he and his wife are still in contact with a German couple with whom they really became friends. “You wondered why you really had to fight that damn war.”

He did not want to tell much about the war operations he was involved in. War is terrible. “You must also do everything to avoid a war. But if that can not be done, and freedom is at stake then you have no choice. Then you have to fight.“

But he wants to tell one story about his time of war. When he had to cross the Rhine with his unit in March 1945, his commander asked him to take a seat in the Jeep. “He found a mandoline somewhere. Do not ask me where he found it. If I could play that, he wanted to know. Only guitar, I answered. Then you can also play a mandoline, decided the commander. Play. And so, under a sound of gun and machine gun fire, we drove over the newly laid bridge across the Rhine.

Ken volunteered at the army when the war broke out. Initially, he was rejected because he was too young. Later he joined the Cheshire Regiment until 1941. Then, until 1947 in the Middlesex Regiment. Why did he volunteer at the time? “We had no choice. There was a war going on.“